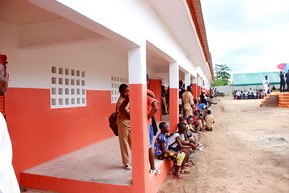 "For us, Africa is a sleeping giant. We see great opportunities for growth in the long term. We want to be a part of that,” says Andreas Lapp, Chairman of the Board of LAPP Holding AG.

Indeed, experts are already predicting that the African market will be among the world’s fastest growing markets in just a few years. With its 54 countries, wealth of raw materials deposits and around 1.3 billion inhabitants, Africa offers great potential. In some countries, growth rates (GDP) of between 6 and 10 percent were achieved in 2018. German companies are still under-represented in Africa, especially small and medium-sized companies. For this reason, LAPP views the African Continental Free Trade Agreement establishing an African Continental Free Trade Area (AfCFTA) very positively. The Agreement was recently signed by 52 African member states and is intended to create predictable framework conditions for trade and investment by German companies.

Expansion of the sales network

All the indicators are pointing to growth: This is why LAPP is continuing the strategic expansion of its sales network this year. Andreas Lapp knows that the almost important thing for a successful entry into the market is to establish long-term and trustworthy relationships: “Africa is anything but homogeneous. While some countries are already very developed, others are not even connected to a power grid. Some countries are currently developing so rapidly that they are skipping whole stages of technological development. This makes access to this market a major challenge for us at LAPP. At the same time, we also benefit from the enormous prospects that come with such diversity.”

The demand for connection solutions from LAPP is constantly growing: In some regions of Africa, LAPP was able to achieve up to 50 percent turnover growth in the last financial year. The demand is particularly high for automation, the food industry and the energy sector with the expansion of power grids and the use of renewable energies such as wind and solar energy.

LAPP has had its own subsidiary in South Africa since 2010, which its 30 local employees use as a base to serve 7 countries in southern Africa. At the end of the year, LAPP Southern Africa moved to a new location in Johannesburg. With 2,700 square metres of storage space, it is four times as large as its old location.

In North and West Africa, sales have so far been handled by the Portuguese company LAPP Policabos. In these regions, LAPP is supported by sales partners and local staff in Morocco, Tunisia, Algeria, Egypt, Senegal, Ivory Coast, Ghana and Nigeria.

In order to increase the market opportunities in Africa, a separate sales company will be opened in West Africa. In the near future, LAPP will also expand in East Africa. At the same time, the company’s network of partnerships and digital presence are being continuously expanded. 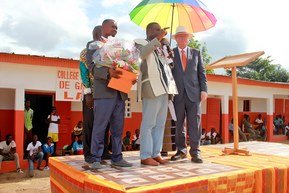 Investment in education and training

Last autumn, the “Collège Andreas Lapp” was opened in Galebre, Ivory Coast. The initiative for establishing the school first came from LAPP employee Désiré Kope, who works in the company’s logistics and service centre in Ludwigsburg. Désiré saved for many years to set up a school in his home in Ivory Coast. Thanks to additional financial support from Andreas Lapp, his dream has now become a reality.

Andreas Lapp finds it extremely inspiring that an employee wants to use money earned in Germany to do something useful in his home country that will help the local people in the long term. “Mr Kope's commitment is fantastic. It’s something that we simply have to support”, he comments, adding: “I very much hope that one day, many young Africans will have the chance to seek their fortune in their own country. We need to invest much more in people's education and give them access to technology and skills development. This will create local prosperity and enable young African people to have a good life and good career development in the place where they were born.”